Lancaster Stands Up members voted overwhelmingly (87% of the vote) to endorse Ismail "Izzy" Smith-Wade-El in the 2022 Democratic primary. Thanks to every LSU member who participated in this endorsement process. The endorsement statement below was written by LSU's leadership team. 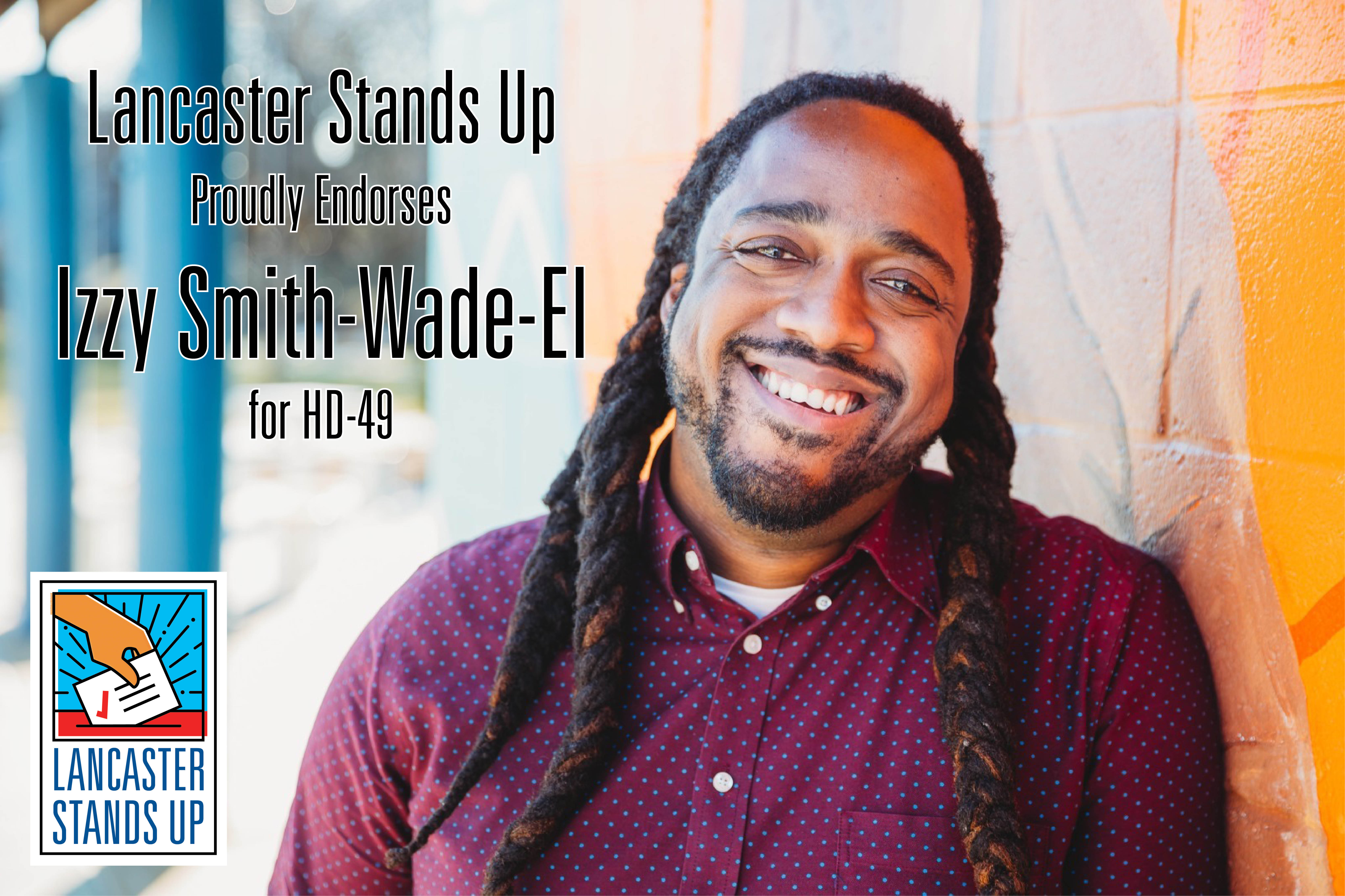 Two Saturdays after the 2016 election, when 300 Lancastrians gathered at Southern Market for an emergency community meeting in the wake of Trump’s election, Ismail “Izzy” Smith-Wade-El was there.

When GEO Group tried to privatize Lancaster County’s prison reentry program, and we organized to stop them, Izzy was there.

Last summer in the wake of the murder of George Floyd, when renewed protests calling for police accountability, justice, and equality swept the nation, including here in Lancaster, Izzy was there.

Over the past two and a half months, as Kellogg’s workers have been on strike demanding fair compensation for their work and a fair contract, Izzy has been out on the picket line.

Simply put, Izzy shows up. And it is little wonder that our members voted by an overwhelming majority to endorse Izzy to represent Lancaster in Harrisburg.

Today we are living through multiple crises that our political system seems incapable of addressing. Our healthcare system is broken. Our public school system is stained and constrained by gross inequality. In Lancaster, as with so many communities across America, runaway housing costs are making it so that more and more people cannot even afford to live here. Economic inequality is out of control. Racism, racial division, and racial inequality not only continue in our society but by many measures these problems have grown worse in recent years. The COVID pandemic has exacerbated the economic crisis, while also claiming the lives of over 800,000 Americans, with no end in sight. And catastrophic climate change has arrived on our doorstep, threatening humanity’s very future.

We desperately need more leaders who possess the courage to confront these crises.

Izzy represents the spirit of democratic renewal that our community and our nation need. He understands very well that this political system is never going to reform itself—that it is up to everyday people like us to demand and to win the change that we long for. It is up to us to get ourselves organized into a force capable of contending against the big moneyed interests that have hijacked our economy and our democracy for the few at the top.

Izzy is for the many, not the few. He believes not only that everyone has the right to a good home, a good job, and a good education, but also that we as a society are more than capable of guaranteeing these things to everyone.

In today’s political climate, it is all too easy to grow jaded and cynical and to come to view these sorts of aspirational goals as naive or utopian. But Izzy is a realist. He harbors no illusions that this vision can be accomplished immediately or all at once, let alone easily or without a struggle. And he understands fundamentally that none of it can be accomplished if everyday working people are passive and marginalized. We have to be active and part of an organized force.

We know how hard it is to build that force, especially because of the deep lines of divisions in our society: race, religion, geography, gender, sexuality, and ideology. But Izzy has shown a deep commitment to helping to organize that force. Over the past four years, Izzy has helped to make positive change in Lancaster City government. He successfully decriminalized cannabis possession in Lancaster, reducing the punishment for possession to a small fine. He moved Community Development Block Grant funds from drug enforcement into affordable housing, and helped secure the largest investment ($5 million) in affordable housing in Lancaster’s history. He reformed the city’s use of force policy, which hadn’t been updated since the 1970s. And he helped to remove the former police chief who opposed reform (and who approved the use of tear gas on children).

In a few short years in city government, Izzy has accomplished a lot for the people of Lancaster. But Izzy also understands the limits of what city government can do so long as Harrisburg stands in the way. He is determined to reform the way “third class” designated cities like Lancaster are treated and the severe constraints placed upon us that limit our ability to chart our own destiny and development.

We are proud to endorse Izzy Smith-Wade-El in the 2022 Democratic primary.